Hasbro’s been expanding their core game lines for the past few years, beyond the unfortunate branded products that sprout around blockbuster licenses like crabgrass. These new games go far beyond merely slapping SpongeBob on the Operation table. Core brands like Monopoly and Scrabble are rebuilt into whole new games, many of them entirely new designs with a thematic connection to the original.

Scrabble Flash (Hasbro: $30) is one of those pleasant surprises, particularly since it’s a high-tech take on an appealingly low-tech game. My normal attitude is: electronics are good, and boardgames are good, but let’s just keep them apart, shall we? I may like chocolate in my peanut butter, but I utterly HATE electronics in my boardgames.

Well, I may have to change that attitude if Scrabble Flash is an indication of things to come. Really, though: it’s not a board game: it’s a whole new concept, and it’s pretty impressive.

Scrabble Flash is a set of 5 “smart” tiles. Each is 2”x2” square, and about 3/4th of an inch thick. The body is white and red plastic, and the face is dominated by a screen with a little input button at the bottom. Each of these screens is a liquid crystal display (LCD), unlighted and capable of fairly simple graphics. When placed next to each other, the smart tiles communicate via infrared (IR) technology, and thus begins the magic.

Once these tiles are placed in a row and turned on, they collectively show the startup screen, which allows you to choose from one of 3 game types: Scrabble Flash, Scrabble Five-Letter Flash, and Scrabble Pass Flash.

Games begin with each tile displaying a single letter. When you put those tiles into order and they form a valid world, the screens blink, the game registers your score, and you can form the next word. The word database is based on the official Scrabble list, which means it choked on the word WODE. (It’s a variant spelling of “wood” and the Middle English word for “madness,” and I always get ticked off when it’s rejected. What’s the point of knowing Middle English if you can’t throw down WODE?)

The three games run different variations on this format. Flash is a solo game that gives you a selection of 5 letters and 60 seconds to form as many 3-, 4-, and 5-letter words as you can. Each word is worth 1 point, and each 5 letter word adds 5 seconds to the clock. At the end, the game tallies your actual score, and displays the maximum possible score, just to rub it in.

Finally, there’s Scrabble Pass Flash, which is the only multiplayer game. In this one, you make your 5-letter word, then pass the tiles to the next player. Players are eliminated when they can’t form a word, and the last player standing is the winner. There seems to be no limit to the number of players who can participate.

All three games are playable with only 4 tiles, as well: simple leave off one tile when you begin. The whole thing actually feels a bit more like Boggle than Scrabble. (NOTE: I just noticed that it’s called “Boggle Flash” outside of the US and Canada, which tells us a bit about which brand is more popular in the rest of the world. Also: I’m pretty sure Mattel owns the name “Scrabble” outside of the US and Canada.)

Everything about this game just works, right down to the packaging. A small plastic box holds all 5 tiles, and the instructions are even properly pre-folded to fit in the bottom of this box. This allows you to chuck the bulky display packaging and makes the game nicely portable.

I’m a Scrabble nut. I always have a game going via Facebook, and it’s the most used App on my iTouch. I’m not one of those people who gets all bugged out whenever someone alters a classic game (or movie). The classic is still there: no one is taking it away from you. This just extends the idea a bit, and when the gameplay is this fresh and fun, I’m not sure how even the Scrabble purist can complain. 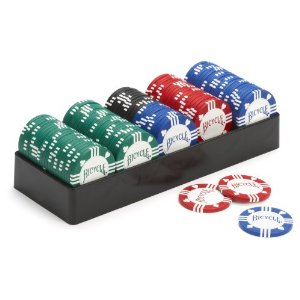 Our next giveaway is a single set of Bicycle Premium Tournament Poker Chips. These are 8 gram, casino grade, clay-filled chips. (By comparison, the lightweight plastic chips found in most homes are only 2 grams.) There are one hundred chips in a plastic tray.

All you need to do to be eligible is:

2. Let me know you’d like to have your name entered. Do this in one of the following ways:

I’ll choose winners by the scientific process of writing names on little pieces of paper and pulling them out of a hat.

Prizes have been provided by the United States Playing Card Company. 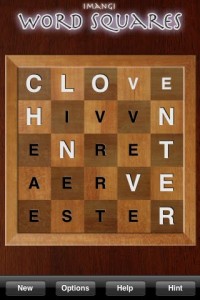 After I posted yesterday’s word square puzzle, I decided to check out the App Store, and lo and behold, a company called Imangi has created an app called Word Squares.

I knew before I even clicked on the link that they would describe it as “Sudoku with letters,” and sure enough, those were the first words of the description.

The only problem is that, other than their shape, they really aren’t like sudoku at all. There’s a completely different skill set involved in creating a word square and solving a sudoku. (And, since I haven’t said so on this blog yet, I might as well say it now: I don’t like sudoku, and I’m frankly baffled by its success. The idea that they’re replacing crossword puzzles as the favorite puzzle pastime is simply further proof of the decline of Western Civilization. But I digress.)

Imangi’s Word Squares is a nice little puzzler with 20 sample puzzles in the free version, and 1,000 in the $2 version. These aren’t the kind of pure word squares about which I wrote yesterday: the vertical and horizontal words are different. This actually makes them easier to build but harder to solve, since finding 1 vertical word does not mean automatically finding 1 horizontal word.

The puzzles themselves range from 3×3 to 6×6, with the 6×6 providing quite a nice challenge. This is far more difficult to do than sudoku, since you’re not merely finding the proper placement of each letter, but also creating actual words.

There’s quite a lot of puzzle play time in this app. Try the free version to see what you think.