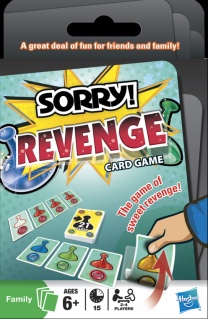 I’d have to say that any game of Sorry is revenge enough. Much as I love ancient games, Pachisi is one I could live without, and it doesn’t get any more enjoyable by adding slides and squaring the board. Race games, as a rule, are not that interesting without the introduction of some unique gameplay mechanic or theme. (One example is the German game Hexentantz, which hides the color of each piece under a witch’s hat, making it a far more interesting experience.)

Thus, it was with some reluctance that I picked up Sorry Revenge, one of Hasbro’s many “expansions” to their core franchises. Sorry as a card game didn’t really seeming like a particularly brilliant idea, but I wound up liking it for a simple reason: it has almost nothing to do with Sorry other than it’s visual elements.

Sorry Revenge mashes together elements of 21 and Uno to create a pretty entertaining game. Up to 4 players each have 4 2-sided pawn cards, which are laid in a row in front of them. These begin the game with the “Start” side up. The goal is to flip all 4 cards to the “Home” side. The first person to do so, wins.

Each player is dealt 5 cards for a hand. The goal is to play a number card so that the running total adds up to 21 during your turn, without exceeding it. For instance, player A puts down a 7, the player B puts down a 10. If you can play a 4, you get to turn over a pawn card. If, however, you can only play a 5 or more, everyone else but you turns over a pawn card.

Once 21 is met or exceeded, the count resets to 0 and begins again.

There are a lot of special cards that allow you to switch direction, take two cards, play two cards, block someone’s pawn, counteract a block card, or slide the cumulative score to a specific number.

This was obviously an attempt to come up with something like Uno, and it partly succeeds. All the elements are there and it’s a perfectly enjoyable game. It just doesn’t seem to have that something special that makes a game a classic. This might have something to do with the constant addition and running totals, which can slow the game down a bit.

It works okay with two players, but is a lot more entertaining with 4. (There’s no reason why two decks can’t be put together for an 8-player game.) It’s a good little family game or warmup game. Although it’s not going to replace Uno, it might make a nice little alternative. 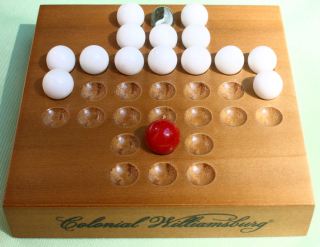 Fox & Geese is another ancient game that followed a winding road to the New World. It’s usually classed as a “Tafl” game, which is a category of games in which the sides are unevenly matched. The games derive their name from a cluster of Icelandic games related to Hnefatafl, but in fact “tafl” just means “board” or “table.” It’s a word found in various Germanic languages, and is often used as a suffix in games as diverse as Halatafl (an early version of Backgammon) and Skáktafl (a kind of Chess).

Over the years, “Tafl” just came to mean any game where one side outnumbers another, with the weaker side having different movement rules or victory conditions. Technically, they’re called “asymmetrical abstract strategy games.” These are classed as “hunt” games, and usually feature some kind of force (fox, wolf, king) trying to elude or eliminate a larger force (geese, hare, soldiers). The first reference appears in the Icelandic Sagas around 1300 AD, but the games are no doubt older than this. The earliest English reference to a game like Fox & Geese comes from the household inventory of King Edward IV (1461-1470), where his account books list an order for “two foxis and 26 hounds in silver overgilt.” It was not unusual for the “geese” to be called “hounds.” (There’s also a game called Fox & Hounds, but that’s a different beast.)

Although there’s no written or archeological record for either the origin of Tafl games or their migration to England, we can always speculate. The Viking raids on Britain ended, oddly enough, in the very busy year of 1066, when the Norsemen were defeated at the Battle of Stamford Bridge. Once the Norse were shoved out the back door, the Normans came in the front door, and stuck around a little while. (Like, forever.) Since the Normans were descended from the Norse, we can speculate that Tafl games might have found their way to Britain through either source. Either way, it’s wholly possible that Halatafl, the game most like Fox & Geese, might have been in Britain as early as the 11th century.

Some of my own ancestors (the de Suttons) arrived with the Normans, and their descendants found their way to American soil in the 17th century. This is how folk culture migrates. The Norse conquer Northern France, intermarry, and create lots of little Normans. The Normans conquer Britain. The English colonize America. The Americans drive off the English. Along the way, they carry their games with them to pass the time, transmitting them across the space of a thousand years to the point where I buy a small portable set in a gift shop in Williamsburg and play the game in a Colonial tavern with my kids while waiting for our meals to arrive. Cultural migration and transmission is not particularly mysterious, but it is fascinating.

In any case, by the 18th century we find Fox & Geese well and truly entrenched among the colonials. It was a popular board game, although one generally favored by children rather than adults.

Colonial children also used their Fox & Geese boards to play Solitaire, a jumping game in which a marble is placed on every space save one. The goal is to eliminate as many marbles as possible by hopping. If you’ve ever eaten in a Cracker Barrel, you’ve probably played a version using golf tees on a triangular piece of wood.

How to Play
The rules of Fox & Geese evolved over the centuries, but the version played in Colonial America was probably the 1 fox, 13 geese version, which is the one most popular today. It’s played on a cruciform board with 33 spaces. Most boards use marbles for pieces and an indented playing surface to keep them from rolling all over the place. The geese are arranged on one side of the board, with no gaps between the pices. The fox is place near the middle. It can also be played using 17 geese. 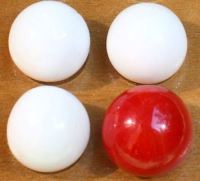 To accomplish this, each side has different movement rules.

The fox can move one space in any direction. If he is capable of jumping over a goose, that goose is “killed” and removed from the board. He may also double-jump, capturing two or more geese in a sequence of jumps, just like checkers. There are no forced jumps.

The geese, on the other hand, may only move forward or to the side. They may not move backwards. They also cannot capture. (After all, they’re geese. Their much feared Honking and Nipping Attacks really don’t bother a fox all that much.) Their strategy is to herd the fox into a corner before he can escape or jump.

Most commentators consider the goose to be the favored side, with the fox unable to win if played correctly. 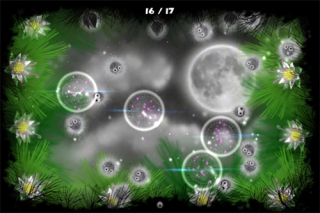 This has been free for a couple of days, so check the app store. Otherwise, it’s $1 It’s back to $2.

I’m not quite sure what to make of Splode, since it’s really not the kind of game I normally like. In fact, I wouldn’t call it a game at all, or even a puzzle. It’s more like a kind of soothing activity with a bit of physics puzzling squeegeed across the surface.

Splode is so minimalist it’s more like a zen meditation than a puzzle. The entire game is made up of the same single screen puzzle repeated over and over again, with the most minute variations for each new level. The input is a single touch on the screen, and everything else is chain reaction.

Each level begins as a black-and-white image of the night sky, framed by pine needles and flowers. Floating through this scene are “splodes,” which are little puffballs that slowly bounce off the edges of the screen and each other. When you touch the screen, any splodes nearby will activate, turn from black-and-white to color, and move away from the shockwave.

This begins the chain reaction, as each triggered splode travels a short distance, explodes, and triggers more splodes. The goal is to clear a minimal number of splodes from the screen, the changing day to night and black-and-white to color.

There’s no strategy that I could discern, and no real trick to solving each screen. The only variations are the increasing number of splodes on the screen and the number of them which need to be cleared.

The game also includes a “score attack” mode, which is basically just a continual version of the regular game with increasing splodes and a fixed number of taps.

This is not a game at all, but more like some kind of strange meditation aid. The calming harp music, the soothing graphics, and the nonexistent gameplay are clearly meant to create a mood to be enjoyed rather than a puzzle to be solved.

Strangely enough, I did kind of enjoy it. I played 40 levels in minimal time, mostly because I kept expecting something to, y’know … happen. (I’m funny that way.) When it didn’t, I just went with the flow, and enjoyed watching the little puffballs float around and change color. I guess it’s kind of like a lava lamp, which raises the distinct probability that someone using mind-altering substances would probably think This is the greatest thing ever, man. Anyone looking for an actual game, however, should probably look elsewhere.