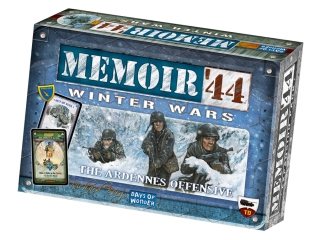 If you haven’t played Memoir ’44 yet, you’re missing one of the real treats of board gaming. It’s easy to learn, fun, and incredibly flexible. I just got word from Days of Wonder that a new expansion is due in November. Called Winter Wars–The Ardennes Offensive, it covers the last major German offensive on the western front.

Here’s what DoW has to say about it:

These will all be critical to fighting the ten scenarios contained in Winter Wars, all focused on those crucial two weeks in December 1944 in the Ardennes. The first six scenarios included are standard scenarios, playable with a single base game and this expansion. Deployment on a Winter/Desert board, while optional, creates a more accurate visual effect. The other four scenarios are gigantic Breakthrough renditions of the Battle of the Bulge. These scenarios will also require a single copy of the already released Eastern Front expansion and Breakthrough Kit board maps.

PopCap will be our prize sponsor throughout October, and I understand that a box o’ PopCap games and swag is winging its way eastward at this very moment. I’m tingling all over just thinking about it.

This sponsorship thing has been easy so far, because both companies (first Bicycle and now PopCap) are ones I truly enjoy and admire. I remember talking to PopCap co-founder Jason Kapalka about ten years ago when they were just getting off the ground, and it was clear they were doing something new: a fresh kind of casual game with a much broader appeal. I never dreamed it would get this big, and I frankly thought their pursuit of mobile gaming was daft. (Obviously, I got that one very wrong.) Ten years on, PopCap games are everywhere, and Plants vs. Zombie shows that they can still innovate in ways we never imagined.

I consider them one of the major forces in gaming today. About a year ago, I wrote a column in Maximum PC in which I suggested the future of PC gaming belongs to PopCap and the casual gaming revolution they ignited. I still think that’s the case. On the short list of Games That Changed Everything, Bejeweled is near the top.

So, beginning in October, we start passing out the PopCap love. Stay tuned.

Thanks to Garth, Eric, and the PopCap family for their kind support.

Open any book of decorum or household advice from the Victorian period and you’re likely to find countless tips on how the Good Hostess can keep her Guests properly entertained in order to avoid Crushing Shame and the inevitable Whispered Comments. These parlor games, as they came to be known, range from silly little time wasters to fairly intense brain scramblers.

Ghosts (also called Ghost) was one of the more popular parlor games well into the 1950s, when James Thurber could still write about it as though it was a common pastime. The rules are very simple. A player thinks of a word, and says the first letter. The next player adds another letter, which continues that word without completing it. This continues, with each player trying to add a letter to the growing word without making a complete word. Proper nouns and abbreviations don’t count.

If a person adds a letter that forms a complete word, he loses the round and gets one point. The next player is allowed to challenge the previous player to reveal his word. If the challenged player can’t produce a complete, valid word, then he loses the round and gets one point. For instance, if player 3 adds a “Z” to create “TEZ,” player 4 can challenge him to produce his full word. Since player 3 was bluffing and has no word beginning with the letter “TEZ,” he loses the challenge. The loser of a round gets 1 point, and players are eliminated when they reach 3 points. Last player standing is the winner.

For instance, I think of the word FIRING, and say the letter “F.” The next person, building on the F, thinks of the word FERAL and says “E.” (“FE” is not a valid word under Scrabble rules, which is what people should use for this game.) The third person can’t think of a letter that doesn’t make a complete word, so he blurts out “B” and hopes his bluff will work. The fourth player challenges player three to produce his word. Unable to think of the word “FEBRILE,” player 3 fails the challenge and loses the round, earning 1 point. If he earns 2 more, he’s out of the game.

Although Ghosts is a pleasant game suitable for all ages and mixed company, Superghosts is an absolute brain sprainer. It preoccupied the mind of James Thurber so much that often he couldn’t fall asleep until he’d figured out all the words that could be made from certain letter groupings.

Superghosts is simply Ghosts in both directions. People don’t have to start spelling a word at the beginning, but can (and usually do) start spelling it at the absolute hardest possible place. I’ll let Thurber describe how this game haunted his mind:

I spent two hours hunting for another word besides “PHLOX” that has “HLO” in it. I finally found seven: MATCHLOCK, DECATHLON, PENTATHLON, HYDROCHLORIC, CHLORINE, CHLOROFORM, and MONTHLONG. There are more than a dozen others, beginning with “PHLO,” but I had to look them up in a dictionary, and that doesn’t count…

Starting words in the middle and spelling them in both directions lifts the pallid pastime of Ghosts out of the realm of children’s parties and ladies’ sewing circles and makes it a game to test the mettle of the mature adult mind. The Superghost aficionado is a moody fellow, given to spelling to himself at table, not listening to his wife, and starting dully at his frightened children, wondering why he didn’t detect, in yesterday’s game, that “CKLU” is the gusts of “LACKLUSTER,” and priding himself on having stumped everybody with “NEHE,” the middle of “SWINEHERD.”

The Oxford Guide to Word Games includes a few letter clusters as examples of just how maddening this game can get. Can you make words that include the letter groupings HQ, PK, XW, ADQ, EKD, GNP, PEV, SPB, and THM?

Undercroft is one giant piece of vintage 1989 RPG cheese. Man, this baby has it all: stepped movement in a “3D” environment, flat sprites with a few frames of animation each, endless short corridors, gloriously over-the-top text, turn-based combat, party-based questing, skeletons, rats, spiders (what ever would we do without the spiders?), and all the rest. Playing this game is like being back on my 80286, banging away at Eye of the Beholder or Might & Magic.

And I loved every minute of it. Sure, it reminds you just how better RPGs have gotten in 20 years, but it’s still a great experience. This is old skool, baby, and it’s palm sized! That just gives me a certain kind of geek-thrill available only to people with a few decades of gaming behind them.

You begin by creating 4 characters, or choosing a random party. Stats are simple: strength, dexterity, and constitution. You can use some extra points to boost your stats, or, depending upon your class, buy some additional powers. Characters can be a warrior, mage, priest, summoner, or assassin, and if I have to explain what those classes are, then this game probably isn’t for you.

Soon after you begin, you find yourself in a basement killing rats, striking with each of your four characters in turn. Once you’re engaged in combat, you can swap items in inventory, use potions, change weapons and spells, and do everything but move.

The adventure follows the silly and predictable path of any late-1980s RPG. You pick up random tasks like delivering letters, catching chickens, or cleaning out monster-infested tunnels. These in turn help pump the levels as you get ready to take on gradually more serious creatures.

Undercroft is a free game, and its creators claim it has 20 hours of gameplay. Although I only have a few hours under my belt, I don’t doubt there’s probably 17 more hours lurking in there somewhere.

I’d say that, as an example of its kind, it’s well-nigh perfect. The only thing that bothered me were the healing mechanisms: either allow us to rest anywhere, or provide more health potion drops.There are some glitches, to be sure. A drop graphic might show one item, which the pickup menu shows another. Music keeps turning itself back on. Other rough spots simply add to the retro charm.

I have a feeling that not everyone will probably react to this game that same way I do. I’m viewing it through a gauzy scrim of nostalgia. My son didn’t like it at all. When I tried to explain that “This old school!” He said, “Yeah, real old school.” That hurts, son. That hurts…

This is a style of party-based first-person role-playing we just don’t see any more, and until Undercroft I hadn’t realized just how much I missed it. Your mileage may vary, but considering that the sucker is free, it’s not like you have much to lose by giving it a try.

Wow, no one took a stab at this one.

The answer is 4+5=32
(In case that doesn’t show up on your screen correctly, the answer is 3-squared.)

(Okay, I just realized how hard it is to do superscripts in a combox. The tag is SUP. This was probably a poor puzzle choice for a blog.)

It has the benefit of being completely outmoded and wonderfully obscure, which are always nice features for me. They were created by the man who invented the equal sign. I know what you’re thinking: “Someone invented that?” Why, yes he did. Apparently “=” was his only flirtation with brevity and clarity.