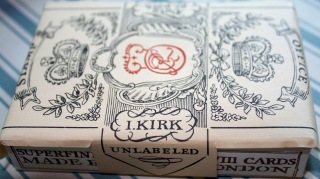 For the previous entry on Colonial playing cards, see this post on the I. Hardy Great Mogul deck.

In addition to the I. Hardy reproduction playing cards produced for Colonial Williamsburg, there is also a reproduction of the “Aesop’s Fables” deck made by I. Kirk in the 18th century. Or, as the label calls them, “SUPERFINE HARRY THE VIII CARDS.”

As with the I. Hardy deck, this one is wrapped in a reproduction of the royal tax stamp, complete with an embossed seal and threat of Dire Consequences for anyone who sells the deck without the stamp. In this case, the penalty is “X Pounds Duty pr. pack Penalty If Sold Unlabelled.” (Remember: that would have been about 1/3rd of the average middle-class annual salary.)

The cards themselves are excellent examples of the printer’s art for the time. Although each card is crowded with text and imagery to the point of distraction, they are quite well made. The actual playing card element is limited to a postage-stamp-sized image crowded, almost as an afterthought, into the upper lefthand corner. The rest of the card is given over to an illustration of one of Aesop’s Fables, along with a little doggerel verse and a two-line moral. As with almost all cards of the period, the backs are blank.