The winner of the Plants vs. Zombies Game of the Year Edition was cappytweet. Thanks to everyone who entered!

This week, we have a heavy metal (as in the actual heavy metal kind, not the Black Sabbath kind) picture frame encrusted with real fake jewels. These frames are pretty rare, actually. PopCap produced some to celebrate the 10th anniversary of Bejeweled, but they were never sold.

1. Share a link (even this one) or follow State of Play via:
Please note: if you already follow us on Google, RSS, Twitter, or Facebook, just let me know that you’d like to enter, and please do a retweet or some other kind of link share.
AND
2. Let me know you want to enter. Do this in any of the following ways:
Deadline is Monday, October 25!
I’ll choose winners by the scientific process of writing names on little pieces of paper and pulling them out of my Mario hat.
ONLY NORTH AMERICAN ENTRIES PLEASE!

Just a quick update to let you know what I’m doing around here. (NB: This is a housekeeping post, and will not meet your Minimum Daily Requirement of Gaming Content.)

Most things are staying the same, but I’ve dropped the Friday Linkaround. It wasn’t that popular in terms of traffic, and I can always link to interesting stories in short posts throughout the week. For boardgamers who want to keep up with all the latest release news, I’d recommend Boardgame News and the Twitterstream Digest at Seize Your Turn. Joystiq, Kotaku, and TouchArcade have the electronic news covered.

I’m probably going to level off to a more steady pace of one app in the morning, and one other post during the day. If something else comes up or I find an interesting news item, I’ll post it. I have a ton of feeds in my own reader, as I’m sure you do as well. It can be hard to keep up with all that reading. I’m trying to find that balance between “consistent and interesting content provider” and “over-posting, naval-gazing nuisance.”

Poptober is going swimmingly, and the PvZ GelaSkin contest was hugely popular. I want to thank everyone who participated. Prizes for the first two weeks of contests will be mailing shortly, and I’ll announce the winner of the PvZ Collector’s Edition later today.

I’m considering putting up a blogroll, so if anyone has any suggestions, just shoot me a line at games =at= aptopub.com or message me on Twitter. I actually don’t read that many gaming blogs, so it might be a good chance for me to discover some new ones.

Personal Stuff
For those who asked: my foot is fine and I still have my big toe. It’s my second favorite toe, so I’m happy about this.

Big Fish has been turning out hidden picture games for PCs and Macs for years. As far as I’m concerned, a little of that goes a long, long way. Obviously, others differ, including my daughter, who loves the blasted things.

There are several different hidden picture series out there, each with a different kind of theme. The Hidden Expedition line, for instanct, has an adventure theme, and the titles to date are Titanic, Everest, Amazon, and Devil’s Triangle. 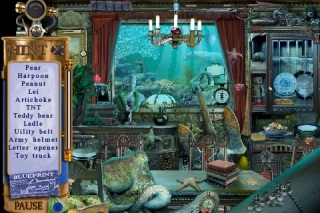 The theme really just effects the surrounding material and the visual style. This amounts to a bit of text to send you on your way (as if pixel-hunting is some kind of grand adventure), and some general “quest” to find something.

I picked Hidden Expedition: Titanic at random because the subject seems interesting, and in the process I unwittingly unlocked the entire secret of Big Fish’s marketing plan: take a basic game format, run through the theme-o-matic to apply some popular topical veneering, and set it loose on the internet.

Despite the limited nature of the format, the results are quite pleasing. The art for the Big Fish hidden picture games is uniformly good. Plenty of objects are hidden in the frame, along with gems and other bonus doo-bobs. There are 20 locations to search, with random object lists to keep the game fresh for replays.

I played this one on both PC and iPod Touch, and it’s made a pretty good transition to app form. The image size is, obviously, much smaller, but the art has scaled well and Big Fish has reconfigured the pictures for the handheld screen.

Object selection is via simple touch input, which leads to one of the app’s more amusing problems. A finger is proportionately much larger than a mouse pointer. It would be pointless and impractical to randomly mouse click on the PC version of the game. On the app, however, the tip of your finger provides input to a much wider area, allowing you to search most of a scene in about 20 random taps. Of course, if that’s the way you want to play, it’s your $5.