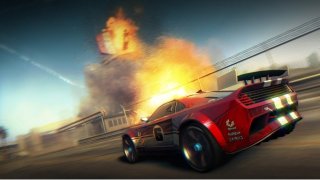 The flu interrupted my ongoing series about the Games 100 issue, which is an annual supplement in Games Magazine dedicated to the best games in any given year.  The first two entries were on Action Game of the Year and Strategy Game of the Year.
Sports and Driving are two genres that leave me cold, so I usually rely on my crack team of advisors, led by Lawyer to the Stars Eric Neigher, to steer me right. You can tell I really respect sports and racing games, because I shoved them into a single category and limited them to 10 or fewer titles per year.
The reason for this is simple: they are almost always repetitious iterations of previous games with annual changes that are of interest only to people who follow this sort of thing religiously. I’ve worked on this guide for years, and I have run out of interesting ways to say that Madden Umpteen-Umpty-Ump has new rosters, slightly improved graphics, and a fresh control system that allows the midline field rule to be applied to the puck while in motion, or whatever it is these people do in between grunting and sweating.
As is now probably obvious, I know nothing about sports. I cannot think of an area of popular passion that is of less interest to me, other than Lady Gaga’s wardrobe, or perhaps that new band you like, the one with that video. The only exception, oddly enough, is golf, which I know pretty well and covered from a gaming perspective for many years. Heck, I even wrote a museum exhibit about golf sims for the World Golf Hall of Fame. Since I understand that golf is considered the most unwatchable game on broadcast television, I’m sure this says something awful about my peculiar psyche. I just don’t know what.
On the positive side, it means I’ve had tea in the private dining room at Royal St. Andrews–the one overlooking the first hole–and actually touched Sean Connery’s locker. (His golf locker. Man, you people have filthy minds.)
But I digress.
This year we rolled out the usual allotment of notices for NFL, MLB, UCF, MILF, and whatever other annual $60 patches made the cut. We considered the professional sports field quite seriously … and then gave award to Split/Second, a driving game in which an airplane lands on your car while your incredible drifting skillz make you so powerful you can literally make the track explode.
Top that, Madden.
http://rcm.amazon.com/e/cm?lt1=_blank&bc1=000000&IS2=1&bg1=FFFFFF&fc1=000000&lc1=0000FF&t=staofpla-20&o=1&p=8&l=as1&m=amazon&f=ifr&md=10FE9736YVPPT7A0FBG2&asins=B002ACFZ10 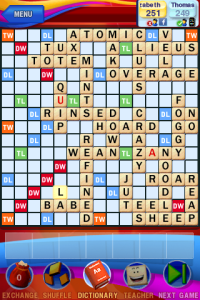 Update: 11/10/10
EA rolled out a big update for their Scrabble app, adding some new features and redesigning others. How does it measure up?
Well, it still loads like sludge, but at least now it supports multitasking, so you don’t have to keep doing a reload every time you move. That’s a huge time-saver for people who keep multiple games going throughout the day, and the prime improvement I would have asked for.
The menu system has been given a complete overhaul, providing a more stylish look and sleeker design. It’s simply easier to get games started and customize features. Heck, the redesign even reminded me of features I’d forgotten about. (I don’t recall ever noticing that you could choose your own music.) The layout of the solo setup, in particular, is much more natural.
After a quick read of the update reviews in the App Store, I see a lot people disagree with this, and think the new look is ugly. Since App Store reviews are to quality commentary what Budweiser is to quality beer, I won’t let this trouble my sleep much.
The “teacher” mode is now available for all play modes, but I admit to being a little iffy on the idea. It’s certainly a nice way to improve your game, but I’ve always found that its availability in multiplayer mode makes it a tempting way to cheat. (It can you show you words with letters you still have on your rack at the end of the turn, allowing you to use that word next turn.)
The bad news? There’s still no retina or Game Center support, pointless sound effects have been added (and can be turned off), and the scoring bug doesn’t appear to have been fixed. People are lining up in the App Store to protest the lack of retina support with the mightiest arrow in their quivers: the Fearsome 1-Star Review. Because, you know, nothing demands cutting edge graphical blandishments like a game designed to played with cardboard and wood.
It’s a good update, and would have been worthwhile if only for the multitasking.
Original Review: 8/18/10

With the demise of the unofficial “Scrabulous,” the official EA/

Hasbro version of Scrabble became the only online version of this classic game. It’s already a huge hit on Facebook, and has also made a successful jump the the App store, featuring multiplayer support that is among the best for any turn-based game.
The support for play across multiple platforms is, in my experience, unique among Apps. (And, no, I am not counting Farmville and Mafia. If you consider those “games,” you’re probably at the wrong blog.) I can start a game with the App, invite players via Facebook, and then anyone playing can continue the game either via Facebook or the App. This is a fantastic feature that needs to be implemented in more games. Unfortunately, there’s a scoring bug that deducts the same amount of points from both sides, and can declares the wrong winner.
The software passes the new moves fairly quickly, and App connection failures are rare. (The Facebook side of the equation is a little more fussy, often requiring repeated screen reloads.) This kind of offline multiplayer is ideal for mobile devices, since it allows people to make moves at their own pace. Because of this App, I now play Scrabble every day, and it’s so easy to use that a move never takes more than a minute or two.
On the downside, it could use a more diverse set of customization options and faster load times. Although the app will send push notifications when a new move from an online opponent is received, you have to restart the app, sit through the logos, and wait while it finds your games. Updates seem to have improved this since the initial release, so we can hope that it will get even better.
Those reservations aside, it’s still a fine implementation of Scrabble for $5.