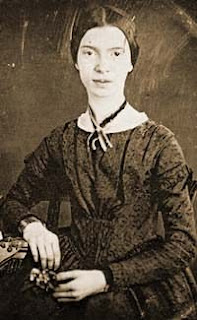 Emily Dickinson‘s poetry is characterized by its highly compressed, idiosyncratic use of language to convey intense emotions. But she also wrote a series of light “riddle” poems in which the subject is never directly stated, leaving the reader to determine what the poem is about. They aren’t difficult as riddles (except maybe for #1489), but they’re important because of their use of language.

Here is the first, with the other three after the jump. I’ll leave off the solutions for now in case readers want to solve them.

#291
It sifts from Leaden Sieves —
It powders all the Wood.
It fills with Alabaster Wool
The Wrinkles of the Road —

It makes an Even Face
Of Mountain, and of Plain —
Unbroken Forehead from the East
Unto the East again —

To Stump, and Stack — and Stem —
A Summer’s empty Room —
Acres of Joints, where Harvests were,
Recordless, but for them–

#1489
A Route of Evanescence,
With a revolving Wheel –
A Resonance of Emerald
A Rush of Cochineal –
And every Blossom on the Bush
Adjusts it’s tumbled Head –
The Mail from Tunis – probably,
An easy Morning’s Ride –

The Grass divides as with a Comb –
A spotted Shaft is seen,
And then it closes at your Feet
And opens further on –

He likes a Boggy Acre
A Floor too cool for Corn –
But when a Boy, and Barefoot
I more than once at Noon
Have passed, I thought, a Whip lash
Unbraiding in the Sun
When stooping to secure it
It wrinkled, and was gone –

But never met this Fellow
Attended or alone
Without a tighter Breathing
And Zero at the Bone.