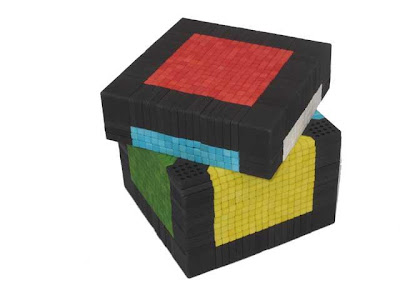 I have never solved a Rubik’s Cube, and never really tried. Thus, a Super-Sized Rubik’s Cube, dubbed “Over the Top” by its inventor, holds even less appeal, particularly when it appears to take about a minute to align the parts correctly in order to make each turn.

A normal Rubik’s Cube is 3x3x3. Designer Oskar van Deventer has used new 3D printing techniques and some impressive engineering to design one that is 17x17x17. You can even buy your very own version, for $2006.54, at Shapeways, a 3D printing company. Here’s how it came to be, according the Shapeways

When Oskar heard of the world records being set for twisty puzzles, like the 7x7x7, 9x9x9 and 11x11x11 by Panagiotis Verdes from Greece, he wanted to try his hand at setting a new record himself. With sponsorship from his close friend Claus Wenicker, Oskar set about designing and testing a number of prototypes, and his third attempt was printed successfully with Shapeways. Sorting and dyeing all 1539 pieces took Oskar 10 hours of work, followed by 5 hours of assembling. The result is an oversized (140 millimeter, 5.5 inches) and fully functioning “Over The Top” 17x17x17 puzzle.

3D Printing is fascinating technology that allows anyone to create a viable 3D model, and then have it turned into a real object. Shapeways describes it as “any additive manufacturing process whereby one machine turns a digital file into a finished physical object by building up that object layer by layer. If you were to be more precise the technology would be called rapid manufacturing and 3D printing would just be one of the manufacturing processes used to create objects in this way.”
These videos show Oskar explaining his amazing design. Frankly, the skill and technology that went into creating it is more interesting, to me, than the puzzle itself.

This is Shapeway’s demo showing the entire process from design through completion: