There was a Minecraft sculpture contest at PAX East, and the winner was Nakki, with this awesome display of block-sculptury:

The sculpture is of Penny Arcade characters Twisp and Catsby. 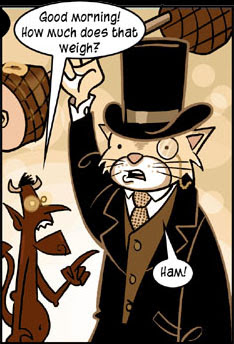 For those who haven’t been inside of Minecraft, you’ll have no real sense of the size of this 3D structure, which is made of hundreds of blocks that are about 1 meter high in the scale of the game. That makes this … well, really big. It just makes me want to break into “Ozymandias.”

This post about Monopoly from The Straight Dope (via Kathy Shaidle) made me realize that not everyone is aware of the bizarre origins of Monopoly. The game was, in fact, created to teach the evils of property ownership and promote Georgism, a kind of red-headed stepchild of socialism and capitalism. Georgism opposed private ownership of land and sought to replace all taxes and tariffs with a single tax on land use. George’s beliefs have stirred a faint bit of interest lately thanks to Matthew Bellamy, lead singer/guitarist of Muse and an ardent Georgist.

The designer of the game, Lizzie Magie, was a passionate follower of Henry George, and created The Landlord’s Game to illustrate (rather poorly) George’s ideas. Lizzie was obviously a little light on the rhetorical skills, since the person who owned the most monopolies and properties actually was the winner in her design, thus proving that being a slumlord and robber baron is pretty cool and you should get started on that right away.

Henry George and Karl Marx hated each other, and George’s definition of “socialism” would have made Marx see red. (Wait a second…) George had no problems with free trade and didn’t hate capitalism all that much (although he really hated the Chinese). Monopolies and landowners, however, made him hoppin’ mad. George was no crank, and some of his suggestions align fairly well with Distributism. He didn’t believe the State should own land (he didn’t trust them either): he thought no one should own land. In contrast to the sweaty lunatic ravings of Marx and Engels, he comes across as kind of sensible and moderate, even though his ideas are completely unworkable.

Lizzie’s game did a pretty rotten job as socio-political propaganda, but it did help teach generations of aspiring capitalists the allure of easy money. As you can see from her original designs, that was probably not part of her plan. (That little circle in the upper right-hand corner shows the Earth encircled by the phrase“Labor Upon Mother Earth Produces Wages.” It would later wind up with a more catchy name: “Go.”)

Patents show the evolution of Magie’s game. This is her first filing for The Landlord’s Game in 1904: 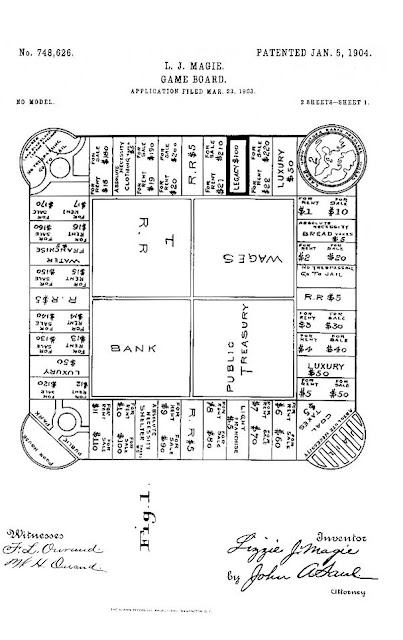 And here’s an original version: 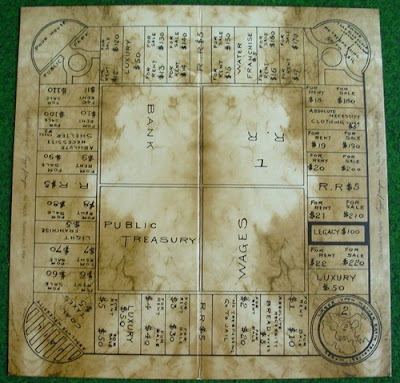 This is the 1924 patent revision (filed under her married name of Elizabeth M. Phillips) which adds the concept of a monopoly for the first time. 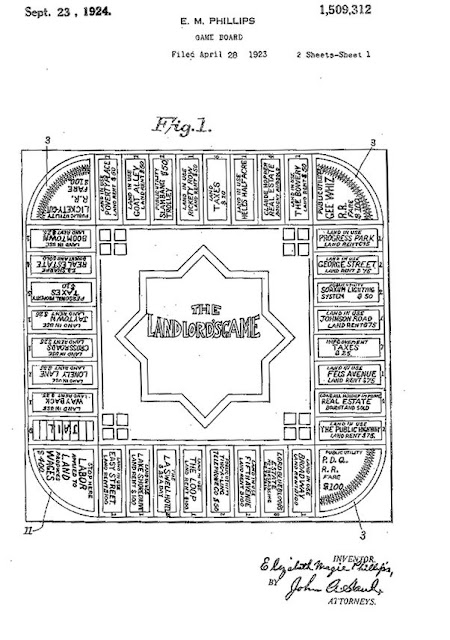 This is a modern rendering of the 1924 revision. 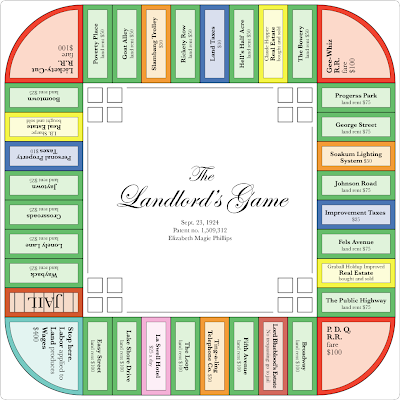 In 1932, Dan Layman created Finance (published by Knapp Electric) which was one of the final stages in the evolution of Monopoly. 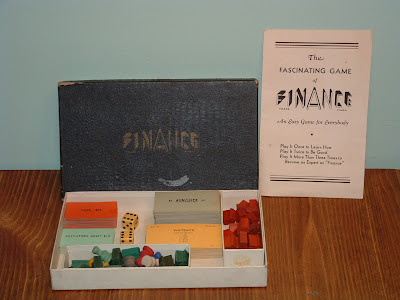 Finally, Charles Darrow ripped off all these elements and created Monopoly: 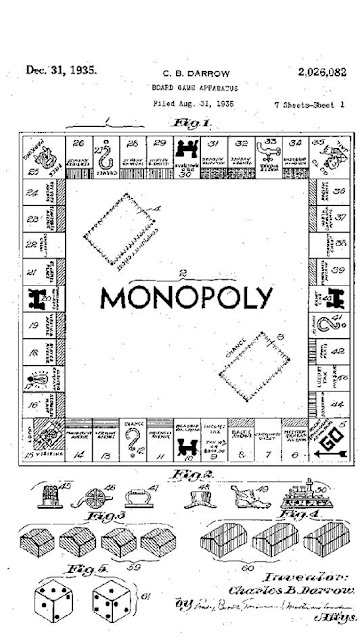 This is one of Darrow’s early versions of Monopoly from 1933, printed on oilcloth and … holy smokes, it’s round! 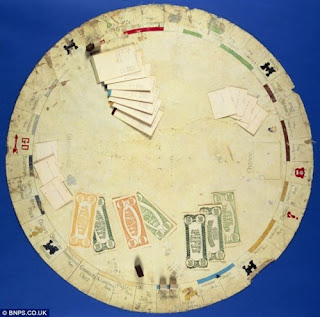 And it all began with Lizzie Magie, shown below in a photo that captures her in mid-transformation into Groucho Marx. 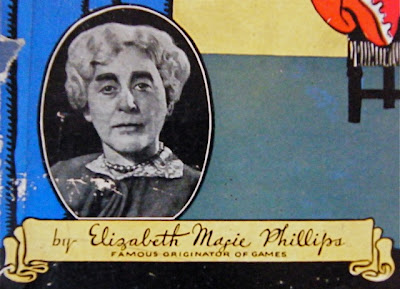 PS: Monopoly has come full circle, so to speak. Monopoly Revolution, released last year, uses a round board like that found in Charles Darrow’s original printing: 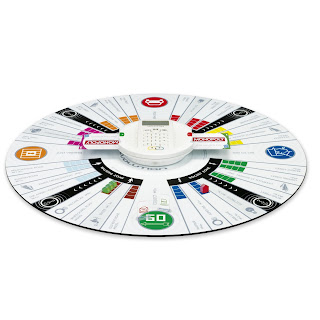