There’s a paradox in martyrdom that we must accept even if we can’t reconcile ourselves to it: those being killed because of their faith in Christ are simultaneously tragic victims of injustice and barbarism, and glorious witnesses entering into everlasting life because of their sacrifice. Christ promised little more than this in the world, which would hate us because it hated him first.

In his Exhortation to Martyrdom, St. Cyprian praises those who die for the faith:

And lest anyone become frightened and disturbed at the difficulties and persecutions which we suffer in this world, it must be proved that it was formerly predicted that the world would hold us in hatred and would stir up persecutions against us, so that from the very fact that these things happen the faith of the divine promise is manifest in the benefits and the rewards to follow afterwards, and that whatever happens to Christians is nothing new, since from the beginning of the world the good have labored and the just have been oppressed and slain by the unjust.

The thing is, I don’t want to die for my faith. I don’t even want to suffer for it. I doubt very much that the Christians of Iraq do either. They want to be left alone in their homes in peace to live and love and worship as they choose. These aren’t airy abstractions and pious plaster saints: these are real men, women, and children being brutally murdered. 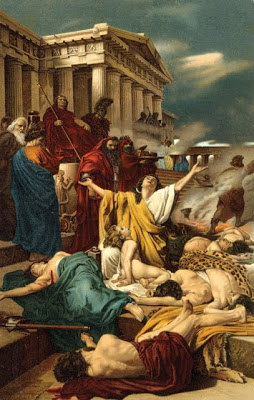 Few saints sought martyrdom, though many embraced it when the time came. That’s why they’re saints. It’s not that many people have wanted to die for Christ, but that, when pushed to the point of decision, grace gave them strength to hold firm in faith and say, This far and no farther. The promise of something greater awaits.

Christians like to imagine what it would have been like to walk with Jesus in Jerusalem and sit at the Master’s feet. Given what we know of the times, the ministry of Jesus, and human nature, it’s more likely than not that most modern Christians would have been lining the via dolorosa and paying their “homage” not with bent knee and palm branches, but with jeers and spitting. His own friends and followers turned on and abandoned him. Do we think we’re any better?

If I am to be honest with myself, then I must assume that I would have been holding the scourge that drew flesh from His back or the hammer that drove in the nails. Anything more would be hubris. I know what it took for God to drag me back to the foot of the cross from the deeps where I was drowning. I have no illusions about what I would have done had the Master come along with his band of holy outcasts and said “Follow me.”

Likewise, Christians prefer to think we’d embrace that final cross if the time came. I certainly hope I would. I hope my faith would overcome my instinct for self-preservation. If  it did, it would only be by the grace of God, which is the most we can hope for when the time comes. We all die, and each only once. Only God can grant us the strength to die on our feet as Christians rather than on our knees as an apostates.

Far worse for the parent is the idea of watching your children not merely die for the faith, but be tortured for it. This is why the story of the mother and her seven sons in 2 Maccabees 7 was an important text for the Church fathers. St. Cyprian references it in his Exhortation, as do St Gregory Nazianzen, St Ambrose, St Augustine, and others in various texts.

The chapter depicts a mother and her seven sons who are tortured and executed by Antiochus for refusing to eat pork in violation of the Law. They are steadfast in their faith, and one after another the mother urges each to keep that faith even as her heart breaks to watch them die. One offers his hands and says

“I got these from Heaven, and because of his laws I disdain them, and from him I hope to get them back again.”

The mother, “her woman’s reasoning [fired] with a man’s courage,” says to them

“I do not know how you came into being in my womb. It was not I who gave you life and breath, nor I who set in order the elements within each of you. 23 Therefore the Creator of the world, who shaped the beginning of man and devised the origin of all things, will in his mercy give life and breath back to you again, since you now forget yourselves for the sake of his laws.”

She urges her last child to “accept death, so that in God’s mercy I may get you back again with your brothers.”

As a late text which assumes the resurrection of the body as the reward for faith, 2 Maccabees offers a striking prelude to the gospel, and this was not lost on the Church Fathers when they used it for preaching. The youngest son even suggests that their sacrifice will be an expiation not merely for their own sins, but for the sins of the nation:

“For our brothers after enduring a brief suffering have drunk of everflowing life under God’s covenant; but you, by the judgment of God, will receive just punishment for your arrogance. 37 I, like my brothers, give up body and life for the laws of our fathers, appealing to God to show mercy soon to our nation and by afflictions and plagues to make you confess that he alone is God, 38 and through me and my brothers to bring to an end the wrath of the Almighty which has justly fallen on our whole nation.”

We are told in the final line that “last of all, the mother died, after her sons.” A mother would choose to die rather than watching her children killed before her eyes, so we have to wonder at the faith and courage she showed until the end.

She knew what every parent should know in our hearts: our primary goal is not to make our children smart, successful, or accomplished (although these are all worthy goals), but to get them to heaven. Again and again, seven times in all, the mother of Maccabees dashed herself against the ragged stones that were the heart of the king. She did not want fear of a “brief suffering” to keep her children from drinking of the everflowing life offered by God.

As the world continues to mint new martyrs, may we do everything in our power to protect their lives, but may we also pray for them to be strong the last, that faith may sustain them in the darkest hours and that, having suffered, they will attain a reward no army could ever take away.