Venezuelan socialist party (PSUV) delegate Maria Estrella Uribe rose to the microphone at the party conference on Monday and said this:

“Our Chavez who art in heaven, the earth, the sea and we delegates, hallowed be your name. May your legacy come to us so we can spread it to people here and elsewhere. Give us your light to guide us every day. Lead us not into the temptation of capitalism, deliver us from the evil of the oligarchy, like the crime of contraband, because ours is the homeland, the peace and life forever and ever. Amen. Viva Chavez!”

Of course, when sane people hear something so absolutely barking mad, the normal reaction is something like this: 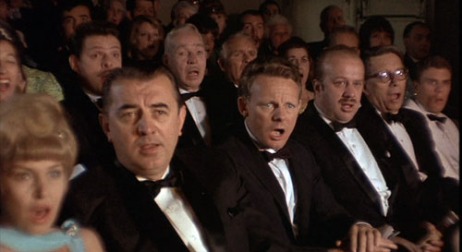 Apparently, however, the Chavistas responded with cheers and applause. That’s some pure uncut Cult of Personality right there.

Li’l Hugo, who may well now have first person knowledge of just what the sulfur of hell smells like, did such a bang-up job in Venuzuela that the former major oil producer now has to import oil for the first time.

The Basilica of Sant’Ambrogio in Milan, first consecrated in 379, was built by St. Ambrose at a site where Christians had been executed. For at least a thousand years (and almost certainly longer) the church has held several silk tunics which tradition associates with the great saint and Father.

Now, a team of archaeologists from the University of Bonn, along with restorers, are studying and preserving the tunics.

“These are marvelously beautiful vestments of sumptuous silk that have been ascribed to the saint,” says Professor Dr. Sabine Schrenk of the department of Christian Archaeology at the University of Bonn. One of them has intricate depictions of hunting scenes with trees and leopards, while the other valuable textile is keptrather simple. There is yet no conclusive proof that these tunics date to the late 4th century, though they certainly cannot be dated very much later. Hence they are very significant testimony for the Late Antique and Early Christian periods.

In the course of many centuries, time took its toll on these famous textiles. “If these fragile silk threads are to be preserved for a long time to come, it is critical to remove harmful layers of dust,” says Cologne textile restorer Ulrike Reichert, who has headed her own restoration workshop in the Dellbrück neighborhood for many years, specializing in preserving early silk textiles. The cloth is painstakingly cleaned with a tiny vacuum cleaner and delicate brushes. “For this we have had to carefully free the material from the protective glass that had been laid over it,” says Professor Schrenk’s colleague Katharina Neuser.

Professor Schrenk and the team of restorers have taken their mobile lab to Milan several times in the last two years, with support from the Gielen-Leyendecker Foundation, to learn more about the origin and history of these textiles beyond the restoration works. “These pieces were revered as the tunics of St. Ambrose probably by the 11th century,” says Professor Schrenk. Aribert, the Archbishop of Milan, arranged for the placement of a textile band on the site where the tunics were kept. “It’s a kind of woven museum label indicating the significance of the relics,” says the Bonn scholar. Presumably, however, a red cross had already been sewn onto one of the vestments much earlier, as an indicator of their significance for the Church.

These tunics have been kept and exhibited in various ways over the centuries. For a while they were stored packed in a chest, sandwich-like, between two other layers of fabric. Until the Second World War, the relics were kept in a frame mounted to an altar in the Basilica of Sant’Ambrogio; they then got new glass frames in the Basilica’s museum, where they remained until a few years ago. To protect them from the light they were then placed in storage drawers. “The pressure of heavy glass plates only aggravated the effect of many centuries of deterioration,” says Professor Schrenk. So the decision to have these valuable silks restored was made.

While the project’s researchers and restorers have already made tremendous progress, they will still have their hands full in the coming years. “Based on the textiles, the Ambrose project reveals the evolution of early relic worship in a surprising way,” says Professor Schrenk. The project will also shed new light on the economic history of Late Antiquity. It is well known that silk was not yet produced in 4th-century Europe and Asia Minor; the expensive thread was imported from China. However, Professor Schrenk is skeptical about the scholarly consensus that all silks of the time were woven in the eastern Mediterranean, primarily in Syria. “Milan at the time, being the emperor’s residence, had access to ample patronage, and used silk in grand fashion. I would be very surprised if there had not been silk workshops there at the time,” says the archaeologist.

During our travels, we attended mass at St. Thomas Aquinas Church at the University of Virginia (Charlottesville). This hulking monstrosity squats outside like an angry sentinel daring people to be Catholic. My son dubbed it “St. Thomas Aquinas Prime” and wondered if it was made of transformium. 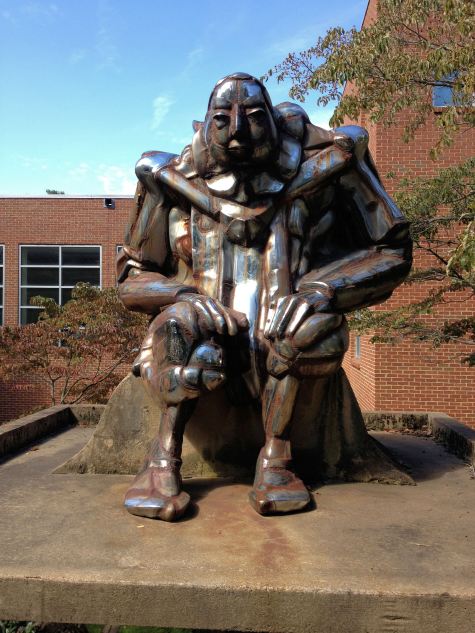 The parish is actually quite lovely and thriving, with a packed mass of students, young families, and older people. With the exception of the music (a bad 1970s mix-tape of strummed, drummed, and tamborined sonic nightmares beginning with “City of God” and ending with “Anthem”) it was a perfectly nice mass. Kudos to the Dominicans for keeping the faith strong on a college campus.

Now maybe they can melt the statue down into hubcaps, ’cause seriously guys: it’s scaring the children.

I’ve been wrapping the summer up with a vacation: boating, Mount Vernon, Spy Museum, Shakespeare, and other to-ings and fro-ings. Overall, a rousing success, ending with a new addition to the family.

Because I don’t want to let the internets down by failing to make my quota of Cute Animal Pictures, here is our new puggle, Ivy: 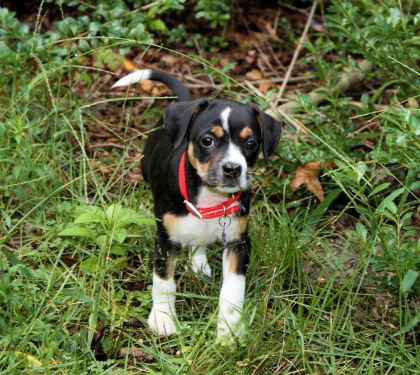 We could never go long in this house without a dog. I still miss my Bella, but Ivy is, I think you’ll agree, Weapons Grade Cute, and she has a sweet personality to match.