The attacks yesterday were meant to do more than just “punish” particular cartoonists and writers for insulting Mohammed. They were intended to make sure others think twice about ever doing something similar.

And they will be amazingly effective. The journalist class–with a few notable exceptions such as the people of Charlie Hebdo–are notorious cowards when it comes to calling out people who might actually harm them. Witness this stunning example: 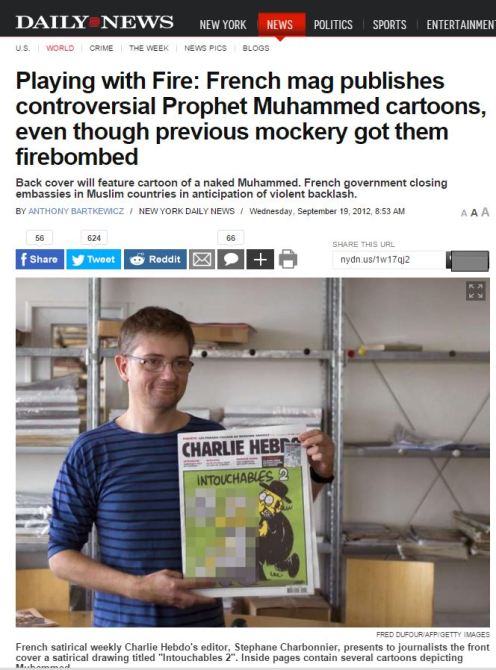 Other than craven cowardice, what possible reason could there be for blurring the Mohammed picture but not the offensive Jewish caricature?

And Charlie Hebdo’s work often was offensive. I don’t agree with their anti-religious agenda, but it’s one they certainly must be allowed to express without fear.

Mainstream outlets like the NY Daily News know they they can offend Jews and Christians with impunity, and so we can expect a bizarre disconnect between those criticized and mocked and held up as evil, intolerant, and violent by the elites (that would be Christians, and sometimes Jews) and the actual perpetrators of much of the mindless violence in the world (that would be Muslims). The Islamic world is certainly dominated by peace-loving people, but a statistically significant portion of them are violent savages, and we do civilization no favors by pandering to their hothouse feelings. They’re well overdue for some insensitivity training.

The attacks aim at changing our behavior. Because people react in the face of violence, many will change their behavior. But since we are agents with freewill, we can choose the nature of that reaction and that change.

And I choose to offend.

I don’t do it out of indifference to the deeply held beliefs of good people. I don’t care much when people offend my beliefs, but I do judge them and hold them in low regard, and Muslims are invited to do so with me. The anti-Catholic and anti-Christian cartoons of Charlie Hebdo say something about the cartoonists who drew them, but nothing at all about my faith. As CS Lewis wrote: “A man can no more diminish God’s glory by refusing to worship Him than a lunatic can put out the sun by scribbling the word, ‘darkness’ on the walls of his cell.”

So I offer today a selection from arguably the greatest work of literature ever created by the hand of man: The Divine Comedy of Dante Alighieri. In Canto 28, Dante places Mohammed and his son-in-law Ali in hell, where they are constantly split for the sin of sowing dissension and heresy. Islam was, in the time of Dante, considered a Christian heresy, with some believing Mohammad to be a renegade Cardinal who had created his own version of the faith. It wasn’t an unreasonable idea: most of what Islam has of value it took from Judaism and Christianity.

And so Dante offers this striking imagery (translation by Allen Mandelbaum):

No barrel, even though it’s lost a hoop
or end-piece, ever gapes as one whom I
saw ripped right from his chin to where we fart:
his bowels hung between his legs, on saw
his vitals and the miserable sack
that makes of what we swallow excrement.
While I was all intent on watching him,
he looked at me, and with his hands he spread
his chest said, “See how I split myself!
See now how maimed Mohammed is! And he
who walks and weeps before me is Ali,
whose face is opened wide from chin to forelock,
And all the others here whom you can see
were, when alive, the sowers of dissension
and scandal, and for this they now are split.

The image has been illustrated for centuries: 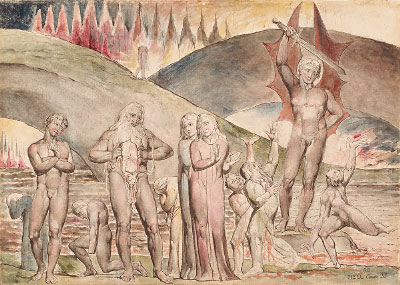 Is Mohammed in hell?

I hope not. I wouldn’t wish damnation on anyone, and with God all things are possible. Even the perpetrators of yesterday’s slaughter are capable of being forgiven when, God willing, they are swiftly found and just as swiftly sent on their way to the afterlife.

But as we face this endless war–and it is a war, with every computer and newspaper and city a battleground–we must not yield to intimidation and threats.

And for now, that we means we must offend.