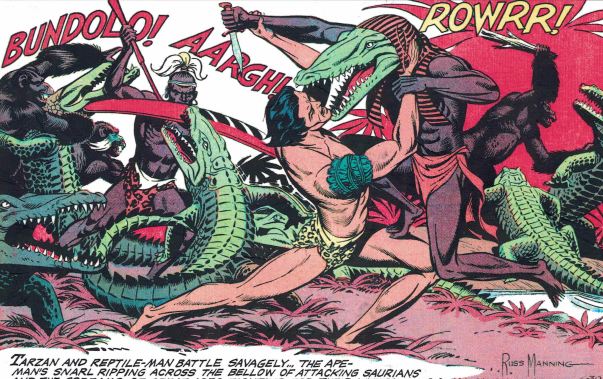 From IDW’s Tarzan: The Complete Russ Manning Strips Volume One

If you want several hours of pure entertainment sandwiched between hard covers, the Tarzan comics of Russ Manning will do the trick.

Manning is one of the great underrated artists of comics. Any short list of the masters of the dramatic strip would include Hal Foster (Prince Valiant), Alex Raymond (Flash Gordon), and Milt Caniff (Terry and the Pirates), but you could put Russ Manning right after them. He was younger than the big three and worked later, so his name isn’t as well known. When he’s remembered, it’s usually for two things.

The first is the deliriously awesome Magnus, Robot Fighter 4000 AD, a Gold Key comic book series in which you’ll routinely find things like a muscular man in a cocktail dress zipping down icy slopes in rocket skies while killing robots by punching them in the neck.

You thought I was kidding?*

Honestly, you need to have this now.

The other Manning works that people still read are his Tarzan strips and adaptations. From 1965 to 1968, Manning drew the official comic versions of ten of the first eleven Tarzan novels for Gold Key. He was determined in all his work to be faithful to the original vision of Edgar Rice Burroughs, and his work captures Tarzan as he was written, not as he appeared in the films.

This fidelity to the source material led the Burroughs estate to choose Manning as the writer and artist who would revive the flagging newspaper strips. From 1969 to 1972 he was responsible for both daily and Sunday strips, and he continued doing the Sundays until 1979, when he began work on the Star Wars newspaper strip for a brief stint. He was assisted on Tarzan by Bill Stout, Mike Royer, and Dave Stevens.

The first of four books collecting Manning’s newspaper run is called Tarzan: The Complete Russ Manning Newspaper Strips Volume One: 1967-1969 (IDW: 2013). It gathers all the dailies and Sundays from December 1967 through October 1969. (In most strips, dailies and Sundays had different continuities because not all subscribers who got the Sunday also purchased the daily.) 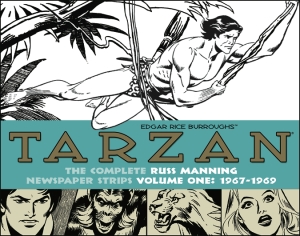 The dailies section includes two year-long continuities: Tarzan, Jad-Ben-Otho and Tarzan and the Renegade. Manning’s mastery of the medium is absolute in these strips, and the balance of character, narrative, and action is handled flawlessly. He signals his return to a more authentic Tarzan in the very first panel, where he has the character says “Too long have I adventured in strange lands! It is time I returned to the best land of all—home.” This Tarzan is articulate, thoughtful, and responsible. He has a grown son named Korak, and shows real concern for his African neighbors. Indeed, one of the notable elements of Manning’s work is the respectful depiction of Africans.

The plots of both stories are too complex to relate in any detail. The first finds Tarzan back in Pellucidar, where primitive tribes, cavemen, and dinosaurs are all at war. The second begins with a faux revolution, then veers into sheer madness with the appearance of a race of creepy winged men who need human women to reproduce. Yeah, it’s pretty icky, actually, even though Manning does his best to keep things family friendly. There’s even a moral conundrum towards the end that’s fairly sophisticated for a daily strip.

The Sunday strips are gathered in the back, and constitute three shorter stories, beginning with the wonderfully bizarre Tarzan Returns to the Land of the Ant Men. Manning was adapting the tenth Burroughs Tarzan novel, Tarzan and the Ant Men, for Gold Key around the same time, so this continuity makes a nice little coda to the original. The Return of Dagga Ramba is a delightfully bonkers story about an old enemy using “a method of manipulating relativity that is utterly unknown to modern science” to turn men in human-animal hybrids resembling ancient Egyptian gods. The book ends with Korak and the Elephant Girls, which relies too much on a ersatz Scooby Doo plot twist you can see coming from a mile away.

Manning draws a beautiful line, and makes superb use of blacks and grays. His figures offer the detail of the finest dramatic strips, while his layouts have a naturally dramatic, cinematic quality. And his pacing is phenomenal. At one point, there’s an intricate chase that would have played out over two months of daily installations. That’s a high level of suspense for anyone to maintain.

The book itself is wonderfully made, with art shot straight from the Edgar Rice Burroughs Estate file copies. Two introductions offer background on both artist and subject—one by Manning’s assistant William Stout and one about Burroughs and Tarzan by Hengry G. Franke III. The book lists for $50, but you can find it on Amazon for about $35.