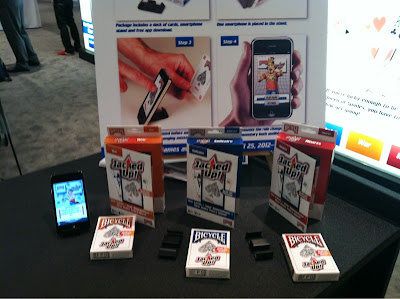 Bicycle is integrating playing cards with QR tech to create some neat twists on War, Hearts, and Solitaire

I picked up this old example of a Bicycle “Fan Back” in the same auction with the USPC swastika cards. I can’t possibly date them, since they seemed to have either been used heavily or perhaps put through the wash a few times. That said, I’m pretty confident in calling them “really old.”

As I wrote last week, I’ve been trying to get my hands on a somewhat rare set of cards from the US Playing Card Company (makers of Bicycle, Hoyle, and other brands). This particular design features a pattern of swastikas, leading some to speculate that it was made for export to Nazi Germany. I think I demonstrated fairly conclusively that this was nonsense, and that the design was merely a common motif (sometimes a symbol for good luck) that was probably discontinued after Hitler rose to power.

Well, I finally won an auction for a single example of the card, and here it is. Based on various features, I’d date this one to sometime in the 1930s. It’s in amazingly good condition for its age, with a firm coating, no bends or creases, and very little discoloration.

I’ve been trying to get my hands on a strange old example of early 20th century card design from the US Playing Card Company. These are “No. 500” cards, possibly produced as early as 1909, and made until sometime in the early-to-mid-1930s. The entire card back is covered in an intricate pattern of swastikas.

Prior to the rise of National Socialism, the swastika was a common graphical motif, found in everything from Indian blankets to architectural details. (My wife’s grammar school featured a nice tiled row of swastikas when she was young. I doubt very much they’re still in place.) The prominence of the design in many cultures with a wide geographical and historical spread is actually easily explained: it’s a common repeating pattern that naturally forms in certain types of basket weaving.

When Hitler adopted the “crooked cross” as the Nazi Party symbol, the once-harmless design took on sinister connotations which it shall never shed. I read some speculation online that these cards were produced by USPC for export to Nazi Germany, which is absurd on various levels. German card design is different, for one thing, and they had no need to import cards. The idea that Nazi Germany would have imported French-suited playing cards from the US is just silly.

Here’s the best quality picture I can find, and this one came from an auction that I lost. If I can get hold of a better quality version, I’ll post it at a later date.

The Rider Back “Chainless” design was used from 1899 until 1917. The design appears to show an unusual shaft-driven bicycle, introduced to America in the early 1890s. By 1899, when the card was designed, chainless bikes were still a bit of a curio.

Wheels within wheels characterize Bicycle’s second “Tri-tire” design, used between 1905 and 1927. These cards are fairly light blue, so I didn’t want to jack the colors up to high. The wing motif implies speed, but more curious is the six-pointed star at the center. Perhaps it was some kind of hub design from the period.

Like Loading...
The Pedal Back design was introduced in 1899 and used until 1917. This is a remarkably modern style of pedal for the period, since many pedals still used clips or stirrups by the turn of the century. You can see a timeline of pedal development at Speedplay.

Like Loading...
This particular design was featured on card backs from 1894 until 1908. John Dunlop invented the first pneumatic tires in Scotland in the 1880s: a combination of fabric, wire, and rubber that created a far smoother ride and revolutionized the bicycle industry. This Bicycle card back was the first to feature the new pneumatic tires.

I haven’t posted much card art lately, but I’m rectifying that this week with five new Bicycle sets. I found them at B.J.s Wholesale Club, of all places, as part of a “Limited Edition 125th Anniversary Design Collector’s Set.” (Hey, it’s their name, not mine.)

For about $12, you get 5 decks plus Bicycle’s Official Rules of Card Games, a 300+ page book which makes the whole package a pretty good value.

The centerpiece of the set is a reproduction of the original Bicycle cards, first produced in 1885. These are pretty widely available, but I’d never bothered to pick up a deck. The picture at the top shows you just what the first Bicycle Rider Back looked like. The bicycle implied a great deal to a late 19th century audience: freedom, travel, technology.

For the reproduction set, Bicycle even changed the card faces a bit, reducing the corner markings to their original size.

Also included is a reproduction of the original Joker, named the “Best Bower,” (also known as the “Benny” or “Imperial Bower”). In Euchre, the “Best Bower” is the top-ranked trump, indicated by either the Joker or the Two of Spades.

Bees are one of my favorite cards. They have history, style, and a good feel. Until USPC send me some plastic cards, I never used anything but Bicycle and Bee, and I still think Bee is perhaps the best paper card made.

Consolidated-Dougherty started printing Bees in 1892, which explains that mysterious “92” on the Ace of Spades. USPC aquired the company soon after, and they’ve been printing them ever since.

They’re a popular casino brand, and sometimes you can find them in discount stores with casino logos on the backs. They’re also apparently a popular card for counterfeiters, as this site amply demonstrates.

The most striking aspect about Bees are their borderless backs. The diamond pattern on the back extends all the way to the edges, and creatives a distinctive down the sides of a stacked deck.

Face designs have been standardized in line with Bikes, but the Ace and Joker remain distinct.